Celebrating a 25th wedding anniversary is a significant milestone any married couple should be proud to reach. Being married for quarter of a century should be seen as a shining example of how successful marriages can be. Modern life is not the most sympathetic of bed fellows and has a tendency to throw obstacles in the way. Staying steadfast and keeping a relationship alive can be very difficult when facing all the trials and tribulations of daily life. All the more reason to enjoy such a significant event and mark the occasion with silver wedding anniversary gifts. Whether you’re looking for an anniversary gift for your parents or a couple of friends you’ll be pleased to know that we’re here to help. We’ll even be able to help with some anniversary gift ideas for your spouse.

Silver wedding anniversary gift ideas for couples that can be shared 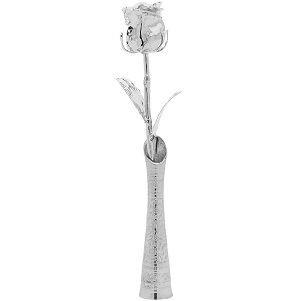 There are lots of suitable gifts to choose from whether you’re looking for a silver wedding anniversary gift for your partner, friends, parents, family or another happy couple. Personalised gifts will always be more precious than some generic anniversary gift plucked from the shelf. So let’s look at some of the best gifts you can buy, and how they can be lifted into being something more special.

Bottle of champagne and engraved flutes – The anniversary couple are going to want to toast the occasion so give them all they need in the shape of a bottle of bubbly and two personalised champagne flutes. Give them this gift the day before their anniversary and they can enjoy a decadent breakfast celebration in bed.

Silver anniversary picture frame – This is a chance to show off one of your favourite photographs you have of the happy couple, and will be a gift that can be updated with the latest loving snaps. If you’ve got a photo of them on their wedding day this would be the perfect addition for this 25th anniversary gift.

A celebratory rose – Flowers are always a popular gift for anniversary celebrations and there are certainly lots of options. Iris is the flower traditionally associated with such an event, so order a bouquet in honour of the couples anniversary. Alternatively give them some iris rhizomes they can plant out in their garden. Every year they’ll be reminded of their anniversary when the irises bloom. If you want to give flowers but are concerned about the longevity of your gift consider giving the couple a silver-dipped anniversary rose.

Personalised mugs and calendars – You can go with something comical if you’re certain about the couples sense of humour, but you might want to play it safe and include photos, messages or details of their wedding day.

A newspaper from their wedding day – This might seem like an unusual gift, but is a particularly good gift if the anniversary couple love to reminisce. Genuine newspapers can be bought for a date of your choosing and will give an insight into the newsworthy events of the day the couple tied the knot.

A tree for the couple’s garden – Silver wedding anniversary gifts for couples that can be planted in the garden will act as a long-lasting mark of every passing year. For a 25th anniversary there are plenty of aptly named plants to choose from. A silver birch sapling would be a great idea, but make sure there is enough room for this spectacular tree to grow.

There are a number of items that are associated with a 25th wedding anniversary, not just the most obvious of silver. We’ve already mentioned that the traditional flower is an iris. But there is also the gemstone tsavorite. Roses are also commonly used for wedding anniversary gifts, and there are a number of suitably named rose bushes for planting in the garden. Silver Jubilee, Silver Anniversary, Celebration and Desire to name just a few.

Receiving an invitation for a silver wedding anniversary party can be exciting, but there’s always the niggling problem of finding the perfect gift. Gone are the days of picking something randomly and hoping the couple will like it. Now there is so much help available and numerous sites sharing silver wedding anniversary gift ideas for a couple there should be no problem finding a gift with meaning and one to be cherished for many years to come.